Reading Rivers & Buildings Walk   (PT 52)  10km  Grade 1
Organised by Thames Valley Walking Club
The walk starts from Caversham Bridge car park to the rear of the Holiday Inn Hotel. It takes you round the heart of Reading town centre as well as the Abbey ruins. It also passes through the 'Oracle Shopping Centre'.

Windsor Jubilee Trail  (PT 69)  10km  Grade 1
Organised by Thames Valley Walking Club
From the former ‘Great Western Railway’ terminus opposite the Castle, the route joins and follows the River Thames for a while. At various points along the route Windor Castle is visible in the distance. The route returns to the station via part of ‘The Long Walk’ and Windsor High Street.

Windsor & Eton Trail   (PT 245)  10km  Grade 1+
Organised by Thames Valley Walking Club
After crossing the River Thames the route goes through Eton passing Eton College. The route then follows the Jubilee River for a while to reach Eton Wick. The route returns along the River Thames to Windsor. At various points along the route Windor Castle is visible in the distance.

Greenham Common Trail   (PT 249)  10km  Grade 2
Organised by RAF WARMA
This trail is routed around the former RAF and USAF Airbase which has been put back to common land following its closure and now owned by West Berkshire Council. The route follows well defined paths that were once the taxiways and runways of the former airfield. Passing buildings and sites on the airfield and Business Park that are now of historical interest.

The Wokingham Blue Plaque and Mosaic Trail    (PT 321)   10km   Grade 1
Organised by Thames Valley Walking Club
This walk takes you through Cantley Park, skirts the town centre, past the train station, then out to furthest points and abck to the town centre before returning to the start. En-route you will pass all the Wokingham Society Blue Plaques and ten mosaics. (For more information www.wokinghamsociety.org.uk/blue_plaques)

Wendover Trail   (PT 261)  12km  Grade 2
Organised by RAF WARMA
The walk takes you a short distance on the ridgeway path of the Chiltern Hills, before winding its way up through Wendover woods for far reaching views of the Buckinghamshire countryside. Coming off the hills you pass RAF Halton and its airfield, into the picturesque village of Halton and the churchyard with military graves. You then follow the canal back into Wendover village. 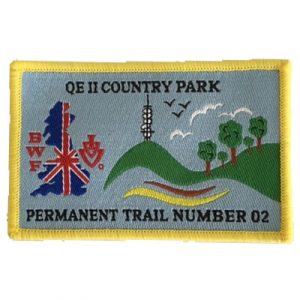 Queen Elizabeth Country Park Jubilee Trail   (PT 02)  12km  Grade 2
Organised by the British Walking Federation
Queen Elizabeth Country Park is situated within the South Downs National Park between Petersfield and Portsmouth. It was opened by Queen Elizabeth on the 2nd of August 1976, and is an established outdoor activity centre with waymarked trails. It is open all year with a visitor centre and café.  The route takes you up onto the South Downs with views across to the Isle of Wight and the Solent.

Winchester City Heritage Trail  (PT 170)  13km  Grade 2
Organised by Amesbury Walkers
The walk visits the historical sights of the city, including the cathedral and the Round Table. A section of the route climbs the steps to St Catherine's Hill to afford excellent views over the surrounding countryside.

Romsey Circular Walk  (PT 203)  11km  Grade 1+
Organised by Amesbury Walkers
The route takes you round many places of interest in this old historic town. It includes old waterways and the River Test, country lanes, some woods and open fields. There are many pubs and restaurants available in the town.

Odiham Jubilee Trail   (PT 238)  11km  Grade 2
Organised by RAF WARMA
This walk takes you through the countryside of north Hampshire, passing through the villages of Odiham and Greywell. The route takes you past the entrance of RAF Odiham, where the Queen reviewed the Royal Air Force in her Coronation year. It also follows a short distance along the Basingstoke canal passing the ruin of Odiham Castle (also known as King John's Castle).

Southampton City Waterfront & Heritage Trail  (PT 244)   12km  Grade 1+
Organised by Amesbury Walkers
A walk round the city taking in many historical sites, as well as along the pier to see the busy seaway and possibly find a cruise ship in dock.

Alver Valley Armistice Trail  (PT 291)  20km  Grade 2
Organised by RAF WARMA
This walk starts at the Alver Valley Country Park and is routed through the historical town of Gosport, along the coastal path and promenade to Lee-on-Solent before returning back to the Country Park, passing many WW1 historic features and visitor attractions throughout the route.

Shawford Armistice Trail   (PT 311)   11km  Grade 1
Organised by Amesbury Walkers
The walk visits the countryside where WWI Training Camps were established before the war and continued in use virtually throughout the conflict. There are also good views of the City of Winchester.

New Forest Brockenhurst Trail   (PT 322)  10km  Grade 2
Organised by Amesbury Walkers
A circular walk around the outskirts of Brockenhurst. Mainly gravel tracks and open grassland but short sections on country lanes and minor roads. One short stretch (c100m) on a busier road with no footpath. Some historical interest mainly pertaining to the two World Wars.

Shanklin Trail  (PT 56)  12km  Grade 2
Organised by Amesbury Walkers
The walk follows footpaths across farmland and through woods to climb up onto the Downs overlooking the sea, to finally walk through the seaside town of Shanklin.

Wroxall Trail   (PT 62)  12km  Grade 2
Organised by Amesbury Walkers
A level walk along an old disused railway track with a climb onto the Downs above Shanklin, then down onto the coastal promenade with magnificent sea views.

Round the Island Trail   (PT 73)  116km  Grade 3
Organised by Amesbury Walkers
A circumnavigation of the island using the signed "Coastal Path". Not strenuous apart from the distance. The I.O.W. bus system makes it easy to split it into short days.

Yarmouth Trail  (PT 141)   21km   Grade 2
Organised by Amesbury Walkers
A beautiful walk round the western end of the island, over the Downs following the coastal footpath.  Views of The Needles and the Solent.

Brading Windmill Trail  (PT 266)  12km  Grade 2
Organised by Amesbury Walkers
A walk through the RSPB reserve and across Culver Down with views over the English Channel. 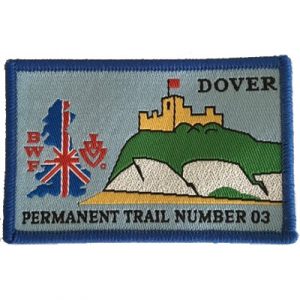 Dover Permanent Trail   (PT 3)  14km  Grade 3
Organised by British Walking Federation
Gateway to England Dover has a plethora of historical interest from the Romans to modern times. Today it plays a major role as a seaport to the continent. The walk visits the town and heads off up to the White Cliffs and the South Foreland Lighthouse, returning via the visitors centre with the magnificent Dover Castle high on the hill. Back down the steps and along the promenade passing numerous commemorative memorabilia and eventually returning to the Old Gaol through the mainly pedestrianised shopping street.

Oxford Permanent Trail  (PT 46)  13km  Grade 1
Organised by Ise Valley Vagabonds - Obtain Route Description - Contact Carol Jones by email caroljones138@btinternet.com until further notice.
Explore the world of Inspector Morse.  Walk into Oxford along the canal and then pass all the main tourist sights and colleges before following the canal and River Thames to Port Meadow and the Trout Inn.

Henley Town & River Walk  (PT 58)  20km  Grade 2
Organised by Thames Valley Walking Club
The walk takes you over Henley Bridge and up Remenham Hill before joining the river and going along part of the annual regatta course. It passes the beautiful Marsh Lock with its unusual horse bridge to reach Shiplake Village, before returning to Henley.

Woodstock & Blenheim Park Permanent Trail  (PT 259)   11km  Grade 1
Organised by Ise Valley Vagabonds - Obtain Route Description - Contact Carol Jones by email caroljones138@btinternet.com until further notice.
A short tour of quaint Woodstock, before taking a circular walk through the extensive grounds of Blenheim Park, with good views of Blenheim Palace (the route does not involve accessing any of the "Pay" areas of the grounds).

Abingdon Trail  (PT 264)  10km  Grade 1
Organised by Lincolnshire Vikings Walking Club
This walk takes you along the Rivers Thames and Ock. It explores the rich historical heritage of Abingdon which is England's oldest continuously occupied town. The Michaelmas Fair held early October is the longest street fair in Europe.

Chinnor Trail  (PT 297)  10km  Grade 2
Organised by Thames Valley Walking Club
A pleasant walk through the Oxfordshire countryside between Chinnor and Bledlow. After leaving Chinnor, the outward route uses tracks and part of the Ridgeway, with the return route using farmland footpaths. Red Kites can usually be seen flying.

Old Churches of the North Downs   (PT 59)  14km  Grade2
Organised by Amesbury Walkers
This 14km circular walk starts from Guildford and visits the churches of St Martha and St Catherine on the North Downs, the ruins of Guildford Castle and the River Wey towpath.

Puttenham Walk  (PT 130)  14km  Grade 1+
Organised by British Walking Federation
This is a relatively easy walk visiting two villages just south of The Hog's Back. The walk passes close to Puttenham Priory dating back to 1760. The village well in the adjacent churchyard was used up to 1750 and then re-discovered in 1972 after the covering collapsed into it.

Cissbury Ring   (PT 133)  14km  Grade 2
Organised by British Walking Federation
This walk visits an extensive hill-fort dating back to 2000BC. The area has many traces of the shafts of flint mines sunk by men and women of the Bronze and New Stone ages. The walk passes Findon Place (a handsome Georgian house of the late 18th Century) St Georges Church dating back to 1053, Gin Inn which dates from 1675 and Mepcote Green site of a sheep fair since 1790.

The Bluebell Trail  (PT 223) 10km  Grade 2+
Organised by Thames Valley Walking Club
The walk follows part of the 'Sussex Border Path' and 'High Weald Landscape Trail' between West Hoathly and Bluebell Railway's Kingscote station.  The walk goes through Bluebell woods which are best viewed in May. Steam trains run regularly on the railway.

The Horsted Trail   (PT 224)  10km  Grade 2+
Organised by Thames Valley Walking Club
This walk follows footpaths and minor road through varied countryside including a section alongside the Bluebell Railway. The walk also passes close to Horsted Keynes station and provides a good view of the regular steam trains that run on the railway.

Arundel Amble   (PT 234)  15km  Grade 1+
Organised by Thames Valley Walking Club
The walk joins the ancient town of Arundel with its Cathedral and Castle (for 500 years the home of the Dukes of Norfolk) and Amberley (home of the Chalkpits Industrial Museum) via the riverside footpath, crossing the recently rebuilt suspension bridge.  The route returns through woodland, farmland and meadows.

Chairman's Chichester City Trail  (PT 315)  10km
Organised by British Walking Federation
The trail is a countryside and town walk around the Roman City of Chichester, going along the Centurion Way, before passing the Festival Theatre, and taking in sections of the Roman Wall and Parks. The route then goes into the city with its historic Market Cross, magnificent Cathedral and the Bishops Palace and gardens.

Storm's Trail    (PT 323)   11km   Grade 2
Organised by Amesbury Walkers
Starting at Duncton, the walk crosses farmland and woods, passing the PH used by the SOE agents before being dropped into enemy territory in WW2.